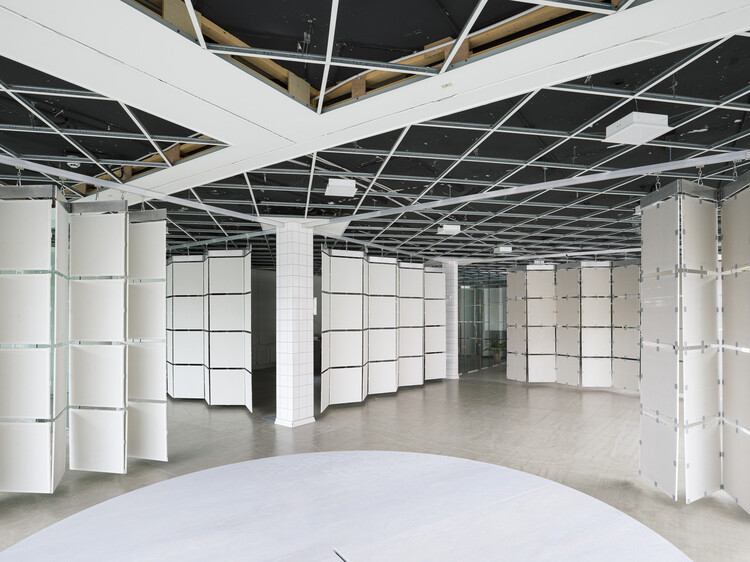 Text description provided by the architects. Since 2019 Art Hub Copenhagen has been based in KÃ¸dbyen, Copenhagen Meatpacking District. In a few years, he will move to a new location. This temporary perspective is a premise that turns into a general dogma: every element must be reused. Nothing is discarded but rather revitalized by alteration in function and appearance.

The dogma is rooted in the indisputable fact that today’s construction industry emits excessive amounts of greenhouse gases. If we are to achieve the climate goals – on which we are fundamentally dependent – this requires a radical transformation in the way we think and create architecture. Therefore, this project is developed both as a materialized architecture and as a case study. It explores how to improve architectural value through temporality and reducing resource consumption.

Originally, meat was sold from this space, it was later transformed into a bank branch and today it houses an institution of modern art. Over time, a series of features were added – a weathered porch, three glass cages, and a massive bank safe. These components disrupt the inherent articulation of the space defined by the rhythm of the columns. Unlike previous renovations, this intervention does not bring new material to the site. It is a gradual return to the original character of the building according to heritage values â€‹â€‹that have faded with each addition.

By rethinking and reusing elements added over time, space is redefined based on an interpretation of authentic atmosphere and spatial composition. No layers are added, instead the existing ones are peeled off, leaving the distinctive spirit of the space on display.

Development and execution took place simultaneously, which is essential for the project as a case study – it is an archaeological process, which dissects the building layer by layer, dynamically creating a catalog of possibilities. Each building consists of a series of components. By exposing them and reconsidering them again, we can explore their untapped functional and aesthetic potentials. From then on, a sensitivity emerges by rethinking the components.

The false ceiling tiles, known from various generic office spaces, have been dismantled and redefined. The thin aluminum profiles are left as a coarse-mesh filter, while the white tiles are rearranged into flexible, hanging folding walls. They are suspended like staged elements emphasizing the varying hue and intensity of the light.

The glass cages at the rear of the space have been dismantled. The panels are integrated into the furniture and as a transparent room divider, gently housing the permanent workstations. Likewise, less important materials are also used, among other things, the aluminum frames function as curtain hangers and the window sills as leveling wedges for the room divider.

The transformation of Art Hub Copenhagen indicates a general way to rethink recycling in architecture. When resources are not consumed but regenerated into value-creating elements, recycling is not a necessary evil but the very catalyst of form and intention. Thus, this project operates sustainably on two intertwined levels: the conservation of the two resources and the distinctive character of KÃ¸dbyen.