For some of the creative minds behind Hyrule Cadence, to be able to use their proven talents and apply them to the game set in the world of The Legend of Zelda is an honor.

Three downloadable content extensions at Hyrule Cadence recently released, bringing new playable characters, new songs and a new story thread inspired by The Legend of Zelda: The Mask of Majora. The DLC propelled the Nintendo Switch game to an even richer experience just over a year after its first launch.

With the release of the new DLC, Hyrule CadenceOliver Trujillo, chief designer of, and songwriter Danny Baranowsky spoke to Mashable via email about the rare opportunity to make a Zelda game, create rhythm-based action games, and their favorite parts of that game. gender.

Mashable: What was the spark or idea that led to the creation of these hybrid rhythm / action / adventure games like NecroDancer’s Crypt and Hyrule Cadence?

Olivier Trujillo: The genesis of the idea behind the Cadence of Hyrule: Crypt of the NecroDancer with The Legend of Zelda game was an attempt to make a roguelike game that felt more fair. The dev team has long enjoyed playing roguelike games, but we felt there were issues with the genre in that they could sometimes seem unfair. Due to the random nature of levels and encounters, in most roguelikes the player may find themselves in situations where an enemy is just too strong for the player at the time of the encounter which may not seem like much fun. We decided to make a skill-based roguelike game, and our idea for doing so was to make it action-oriented, only giving the player a certain amount of time to do each action. As we played, we quickly discovered that it felt like it was moving into a beat, so we decided to try and put it to the beat of a song. It was fun, so we ran with the idea and the rest is history.

What’s the difference in your approach when composing music for a more standard game soundtrack versus composing a game where music is built into the mechanics?

Danny Baranowsky: The most interesting thing in the world for me is the way the music interacts with the game mechanics. It kind of explains my career choice! In some ways it’s easier to write a soundtrack for musical games, but in some ways it’s more difficult. It narrows your scope a bit – you know what to do, but you can feel locked in. Granted, I’m a little tired of writing music that absolutely has to have a strong push to every beat. This is part of the reason for making the peaceful versions of the tracks. It grants a game advantage, in that it signals the player that combat has ended and that they are free to move. It also gave me the opportunity to write stuff that contained real silences and space!

It can also provide unique challenges, both aesthetically and technically. When the dev team comes to you and says things like â€œSo there is a wizard with an oboe grafted onto his faceâ€ and â€œThere are five giant knights with bass guitarsâ€ it might be like both exciting and terrifying. An oboe isn’t exactly a high-energy instrument (at least in terms of electronic musical instrumentation), so write it down to suit the pseudo-EDM-spookhouse-rock style of NecroDancer’s Crypt was a challenge. Kate Letourneau played the oboe parts and did an incredible job matching the intensity of the pieces she played on.

On a more technical level, writing five-part harmonies for a set of bass guitars that had to work each individually because the audio from each bass guitar would end when the corresponding knight was defeated – that was one of the things. most difficult I have ever had to do as a songwriter. It was a situation that I don’t think I would ever have faced in a game without music! The usable range of a bass guitar is quite limited compared to most instruments, and even trying to fit ONE bass guitar into a mix can be a difficult task. Joel Ford, who was actually also the sound engineer on Cadence of Hyrule: Crypt of the NecroDancer with The Legend of Zelda, both recorded the bass and mixed the track, and did an absolutely amazing job mixing it. Several basses are virtually unheard of in the mix and Joel absolutely broke it.

I am always looking for new challenges. I’ve been doing this for a long time, and video games are particularly difficult in their musical demands – especially musical games!

How does it feel to take this idea that you established in NecroDancer’s Crypt and imbue it with something as legendary and iconic as THE Legend of Zelda?

Trujillo: It’s incredible ! We are huge fans of the Legend of Zelda series and were honored to have the chance to honor it with Cadence of Hyrule: Crypt of the NecroDancer with The Legend of Zelda. We’ve tried to include as many of our favorite Legend of Zelda songs, enemies, and characters as possible. We couldn’t include EVERYTHING we wanted, but I hope our players think it does the series justice. I have good memories of playing the original The legend of Zelda for NES with my dad when I was young, and I’ve played almost every other Legend of Zelda game since, and I know the rest of the dev team feels the same way.

The Legend of Zelda is a rich space to work with.
Credit: nintendo

Mashable: How does it feel to make official music remixes for Nintendo?

Baranowsky: So I actually did an interview years ago where I was asked something like, “What games would you work on, what games would you dream of?” It was early in my career and I had never really thought about the question, but one of my answers was The Legend of Zelda! I am fully aware of the immense privilege it has been to be a part of it. The Legend of Zelda is sacred in many ways. It’s strange that it’s so normal for me now. When I first found out about it, I lost my mind a bit and it didn’t feel real. It still doesn’t look real! But I have adapted to it a lot more now.

Any concert will become a job at some point. Just because you’re working on something magical doesn’t mean it’ll just be sunshine and rainbows all the time. Hyrule Cadence it was work! It was important for me to absolutely nail it, both with the scope of the music, the instrumentation, the selected source tracks, all that. I turned to tracks that I was personally invested in, like Gerudo Valley, Dark World, and Lost Woods, but relied on other team members with more extensive knowledge of Legend of Zelda than I did. to make decisions for other tracks.

I try not to be too dogmatic in my approach. Sometimes it’s best to just write down what feels good. I focused on establishing a good ratio of NecroDancer’s Crypt to the feel of Legend of Zelda and I just tried to keep that balance. I am more than satisfied with the result and the reception.

When you work on a beloved franchise like this, you know some people just won’t like it no matter what, and you mentally prepare yourself for it. I was fortunate enough to work on the Cave Story remake years ago and gained that experience. So I felt better prepared for the reception, whatever it was. Working with something as colossal as Legend of Zelda certainly changed the scale of things, but I feel like after all these years I was ready for it.

I am infinitely grateful for this opportunity, and it has been one of the highlights of my entire life!

How was the working relationship with Nintendo?

Trujillo: It has been excellent overall and an interesting insight into the different methods of game development. It’s probably not surprising that Nintendo’s approach to game development differs from ours at Brace Yourself Games, being a large Japanese AAA studio and us being a small North American studio, but their feedback was always relevant. and incredibly beneficial to us. Nintendo has also been very helpful in providing support in the form of outstanding QA and localization testing. Oh, and it was definitely a fun and enlightening experience to be able to visit Nintendo’s headquarters in Kyoto and meet some of the developers on the Legend of Zelda team that we have so much respect for! 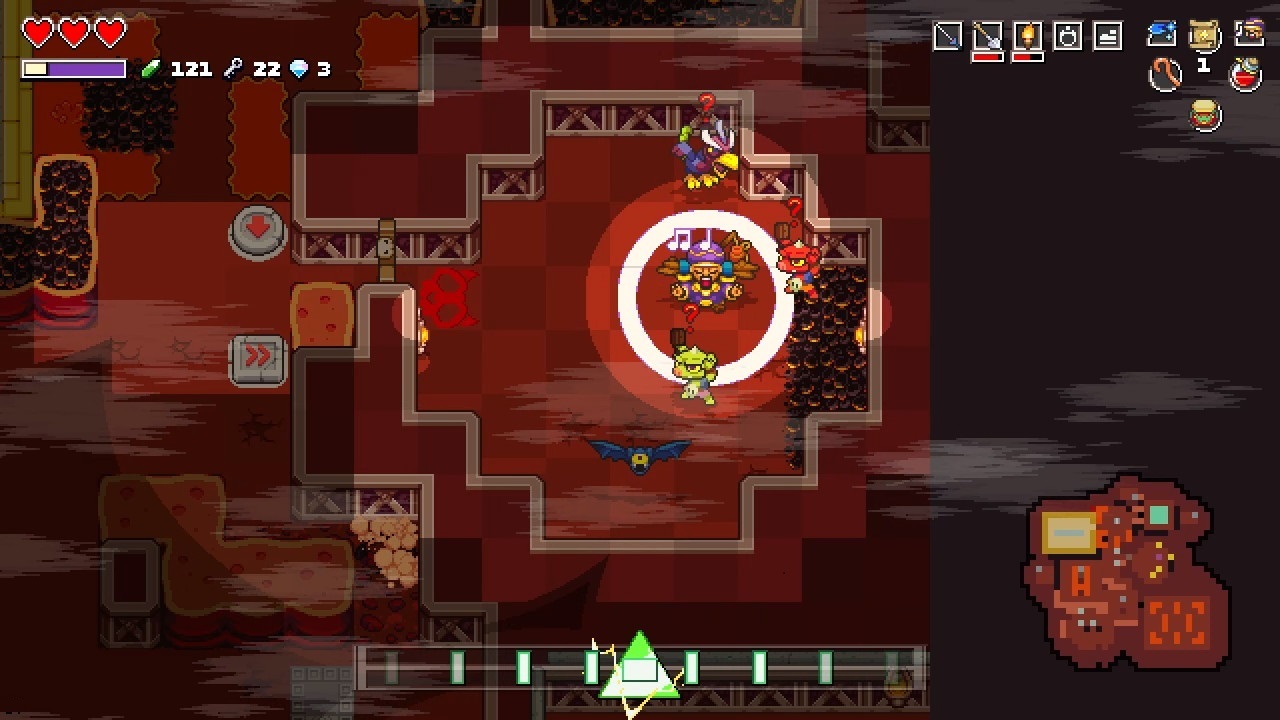 The trader is an amazing character with a beautiful voice.
Credit: nintendo

Trujillo: For the original game, my favorite thing is the bosses. It’s hard to pick a favorite, but if I had to, I would go with Wizzroboe. We had a lot of fun bringing the puns, concept art, and game mechanics to all of the bosses, and the entire development team enthusiastically participated in their designs. I am very happy with how they turned out. For post-release content, my favorite is the trader character. He was the most fun to design and in my opinion has the most unique game mechanics of all the characters.