Here we are. It’s the end of 2021, and I for one am not interested in peeking over my shoulder at anything behind me. It’s a mess! But I can put on my dancing shoes and maybe a hula skirt to start the year off right at Morro Bay at The Siren for a one or two night tropical vacation.

I see island vibes, killer tiki cocktails, hula dancers and a Hawaiian rock band in my future! Plus, a whole smoked pig to accompany a Hawaiian barbecue dinner. OKAY. I drool and get a little ahead of myself. Let’s start with the music!

Morro Bay Mermaid Hosts Hawaiian New Years Celebration Featuring The Hula Girls and The ghosts of Bonneville for two nights: Friday December 31 and Saturday January 1 (7:30 p.m.; 21 and over; $ 50 to $ 65 at thesirenmorrobay.com). The NYE ticket price includes the concert, barbecue dinner, and a midnight champagne toast.

The Hula Girls have been playing their “hulabilly” music throughout Southern California since 2008 with Spike Marble on lead guitar and vocals, Shorty Poole on right and electric bass, Gary Brandin on steel guitar, and Doug Sanborn on lead guitar. drums. Hula-a-go-go dancers Miss Haylee Holiday, Miss Ginger Watson and Miss Veronica Velvet accompany them wherever they go!

Liquid Gravity Brewing Company at SLO brings the Ron McCarley Quartet for his Roaring Twenties party on New Year’s Eve, Friday December 31 (8 p.m.; 21 and over; $ 20; liquidgravitybrewing.com). The cover charge includes a midnight seltzer toast. Bear City Social will be offering food and everyone is encouraged to don their best 20s sons to join in the fun.

Ron McCarley, Director of Jazz Studies at Cuesta College, “is an incredibly accomplished and talented jazz musician. He is widely regarded as one of the best on the Central Coast,” according to Liquid Gravity. McCarley will be on saxophone, Adam Levine on guitar, Ken Hustad on bass, and Darrell Voss on drums.

Last week, Glen Starkey hooked up a really good Numbskull and Good Medicine show lined up for Thursday, December 30, when The Coffis brothers and the men of the mountain play The Siren (7 p.m.; 21+; $ 13 plus pre-sale fees on eventbrite.com or $ 15 at the door), with the folk duo from Morro Bay Turkey nozzles opening. 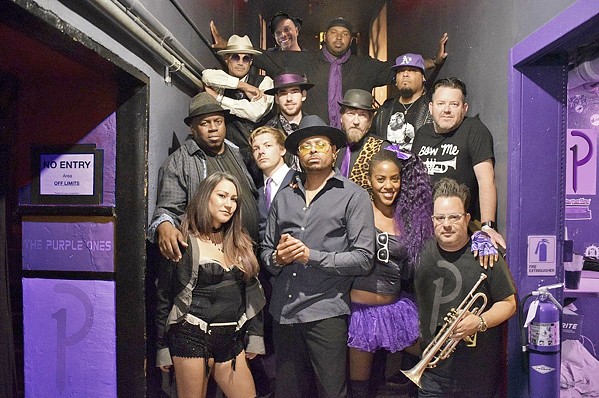 This Oakland tribute band puts 12 pieces on stage, including a full brass section, and delivers their own version of Prince. You won’t catch any imitators or look-alikes in this band, which is all about the music and gets the audience to wake up with energy, rhythm, creativity, and a healthy dose of pure funk.

Songwriters in play presents new songs for the new year on Saturday January 1, at Sculpterra Winery (12:30 p.m. to 3:30 p.m.; all ages; free). With the exception of rainy days and Christmas, Steve Key hosts Songwriters at Play every Saturday afternoon all year round at Sculpterra Winery in Paso Robles. The three-hour show sometimes features full bands, touring duets, or solo singer-songwriters performing their original music.

On New Years Day, Key will be joined by eight other writers who have accepted the challenge of performing newly created compositions to host in 2022. The lineup of new songs for the New Year includes Lauren Hatcher, John Sandoval, Dan Daniel, Douglas Romayne, Craig Louis Dingman, Rob Kimball, Dennis Mikel, and Jeff Sceaux. ??