Most career-based games aim to either mimic a one-T job or build on their more interesting tasks. For example, American Truck Simulator aims to simulate as accurately as possible the experience of a delivery truck driver. Game Dev Tycoon streamlines and summarizes the game development process to focus on the industry’s unique management challenges, such as balancing artistic design and technology.

Unfortunately, the detail work is notoriously monotonous and offers little (if any) intrinsic interest. We have several games about running an entire storefront, but I’ve never seen one from the perspective of a minimum wage employee. For many in this kind of work, it seems like the only way to get rid of existential fear is to engage in an insane groove in their daily routine. Keeping that groove is the best defense traders have against insanity, but so many unpredictable factors regularly make this groove go away.

The more I think about it, the more I think retail is like a rhythm game, except the gameplay is as boring as a shopping cart that spent the entire vacation season at the bottom of a frozen lake. I want a daring developer to fix this by creating the funniest retail rhythm game that has ever existed. Or at least the only one. Besides, someone has to get that cart out of the lake already.

The retail world is already teeming with background music, at least in malls and supermarkets with indoor speakers running regularly. In large parking lots, even cars will make radio music so loud that I shudder to imagine how expensive their drivers’ hearing aids will be in the future. These songs can get tiring in real retail work – don’t get me started on holiday music – but when combined with long playing sessions spiced up by a larger selection, they get a lot more catchy. That, and it’s true that it’s hard to say I ever got tired of hearing “Bohemian Rhapsody” (the song, not the movie) even while cleaning the doors. If you can either allow a bunch of hits of this caliber or create your own in similar styles, you get an authentic and fun soundtrack.

I don’t imagine this hypothetical musical slave simulator as a traditional arcade rhythm game such as Dance Dance Revolution, DIVA project, or so on. I would absolutely agree to that, because Final Fantasy Theatrerythme is my favorite 3DS game these days! But my experiences in retail usually have me bouncing across a whole storefront and repeating monotonous tasks in different areas rather than playing a single continuous performance like most rhythm games.

This experience reminds me more Diner Dash– management game style. It’s a bit of a stretch, but this style of management play could still work in a hybrid rhythm play with Necrodancer’s Crypt motion controls (And yes, a Diner Dash cloning without rhythmic elements would also work, but I have more fun with stranger ideas). For a more creative touch, maybe instead of keeping a steady pace like in Necrodancer, you will need to sync the steps with individual song notes like DDR. It could correspond to the unstable but repetitive flow of retail work.

Beyond the beat dictating the basic movement, I would expect each retail chore to offer slightly different control schemes. For example, cleaning a floor would require directional inputs in both directions, scanning a load of items might require quick button presses, and answering customer questions might involve simple multiple-choice dialogue. It could possibly become repetitive even for a rhythm game. But don’t worry… retail life is full of random dangers like inexplicable damage, being called out to give up what you were doing only to be told to do exactly what you used to do, and more!

To take a few examples from my first two years in retail, I found myself easily confused by unruly customers, and occasionally spilled mop buckets with no fault but my own clumsiness. These things disturbed my figurative rhythm. This could translate into an interesting game mechanic, such as temporarily speeding up or slowing down the literal beat of a song. 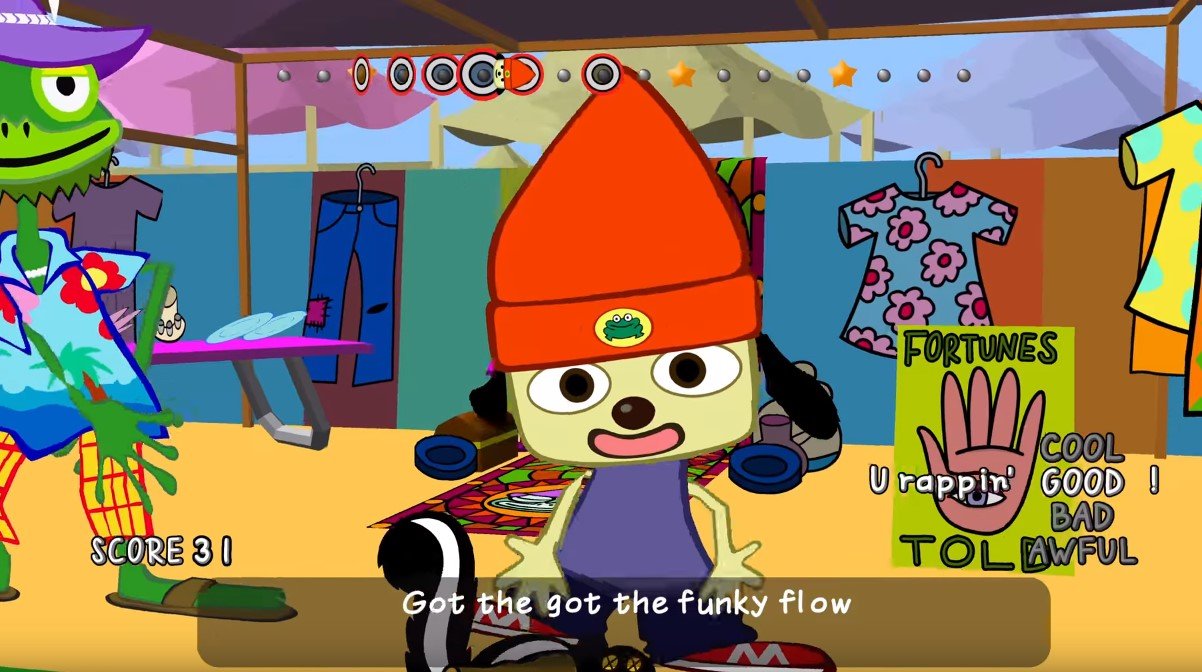 Of course, typical rewards like unlocking new songs are out of the question. This would imply that the minimum wage actually gives hard-working Americans disposable income or that dead-end jobs are rewarding. Instead, you would gain opportunities to chat with co-workers during breaks between shifts, such as Character dance games. Because waifus makes every unlocking system more marketable en masse.

Retail video games are rare, although it’s a job that many of us are familiar with. Retail workers have a lot to tell between financial woes, abandoned dreams, weird coincidences, and the rare healthy encounter with an empathetic customer. This setting has a lot of potential as a backdrop for slice-of-life antics and down-to-earth reality checks.

As much as I’d love to see these theory game ideas, they might be too complicated to help people relax after stressful work. CJ and I exchanged a few more thoughts on this topic, and he offered a The rhythm paradise-style of play, which also adapts extremely well! The rhythm paradise revolves around performing dozens of simple, repetitive, yet extremely eye-catching tasks through mini-games and mini-game medleys. A single retail task would work perfectly as a minigame, and a full shift would be perfect as a medley.

i never regret departure a job in retail, but I’m happy to move on soon, as careers in retail are generally stagnant by nature. After a few years, retail workers want something more stimulating, more engaging, more empowering, and less exhausting. We’ve all done something to try and accomplish this within the confines of retail itself, often something as simple as humming a random tune. All retail-themed kind of rhythm game could actually relate to such experiences and give them a really fun outlet. Fun game design has a good track record of hitting boring realism in the face.

I am a former contributor called Cedi or CediFonei on most corners of the internet! Disclosure not entirely mandatory; I supported Chris Niosi’s RPG TOME on Kickstarter. I really wish it wasn’t the first Kickstarter game I have ever supported …