“In my music, you have to focus on one or two things… one thing actually. I was told that to listen to it is to pay attention to how you listen. It is contemplative. This brief stylistic overview was delivered by Alvin Lucier during a visit to Ireland in 2014. Nearly 5,000 km from his home in Connecticut, the American composer had been invited by the Louth Contemporary Musical Society to perform his flagship piece , I’m sitting in a room (1969) at the Oriel Center located on the grounds of the former Dundalk Gaol.

This special performance was part of an event called sounds in space. Apt given that the relationship between sound and environment is crucial to Lucier’s artistic statement with this particular piece. I’m sitting in a room, a recording in which Lucier articulates (and repeats) a text describing the conditions of his demonstration and what he aims to achieve during its forty-one minute duration. “I record the sound of my speaking voice and I will play it back into the room over and over again until the resonant frequencies of the room build up so that any semblance of my speech, except maybe- be rhythm, or be destroyed,” Lucier intones in the 1969 sound art. “What you will hear, then, are the natural resonant frequencies of the piece articulated through speech.” At times he stutters In the final movement (so to speak) of the recording, the resonant frequencies in the room usurped the narration, turning the timbre of Lucier’s voice into an abstract (and enveloping) buzz.

About an hour’s drive from where Lucier performed his infamous composition nearly a decade ago in rural Ireland, is the Solstice Arts Center in Navan, County Meath. Since mid-June, the center has been hosting an exhibition that takes its name from Lucier’s work. Organized by Belinda Quirke, I’m sitting in a room features the works of five artists, each presenting different perspectives on sound frequency and environment. The upper floor of the gallery contains three separate spaces with very impressive concept pieces that hold the viewer’s attention. Immersive in its essence, the central message of the exhibition effectively enlightens the viewer to the omnipresence of sound while re-contextualizing its role in everyday settings. Some pieces require incisive listening. As you travel through the space, part of the fun is trying to decipher the origins of certain resonant drones and whether what you’re listening to is part of the show or an inherent element of the piece itself. 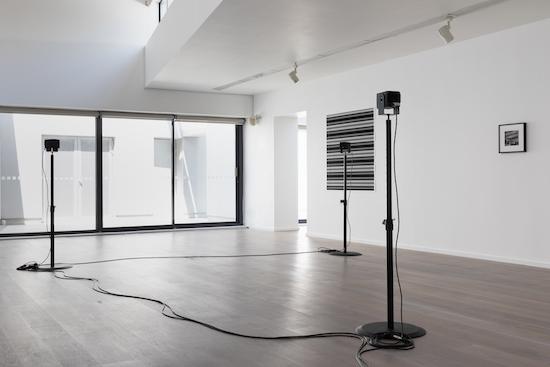 The main body of the exhibition begins with Sven Anderson This voice, specially commissioned by the Office of Public Works (OPW). Three loudspeakers in the center of the room, each emitting sound passages from recordings of singers performing in 78 operas, creating an eerie atmosphere in the spacious room. On the surrounding walls are liner notes acquired from the Derek Hill Collection, the source of the recordings incorporated into Anderson’s work. The liner notes provide fascinating insight into the lives and careers of four revered sopranos: Meta Seinemeyer, Salomea Kruscenski, Bidu Sayao and Ellen Beach Yaw. The typewritten document concerning the latter reveals information that seems relevant to the whole of the exhibition: “From her childhood, she sang a lot outdoors, preferring settings where her voice could resonate. Sensory trickery taunts the viewer in Anderson’s section. When examining the four large-scale prints (each using a portrait of an opera singer to create intricate geometric sequences) that accompany the audio aspect of Anderson’s work, it’s easy to come close to a nearby speaker. Likewise, the striking prints invite the viewer to experience the artwork from different angles to unlock patterns hidden within.

Between the first and the last section of the exhibition is Karl Burke’s site-specific installation, Convergence. Comprised of floor-to-ceiling panels painted black on one side with speakers emitting modular synth waves facing the towering structures, not the onlookers. Exploring this section feels almost like Alice investigating an extremely minimal and monochromatic wonderland. In fact, much of the work included in I’m sitting in a room evokes this feeling. This is further reinforced by the fact that the artists have timed their installations in a loose sequence for the benefit of the visitor navigating through the works. From there, Adam Gibney’s digital and physical media piece Spatial Meditation 4: Silencing the Silence introduces color and corporeity into the exhibition. Its structure, adorned with cables and luminous bells and instantly catching the eye with a vertical line of light, is quite captivating. The noises created by the mechanics of the structure as it operates an overhead microphone that rhythmically produces feedback that triggers what could be interpreted as a shrill hiss or a soothing “ssssh” are strangely hypnotic. 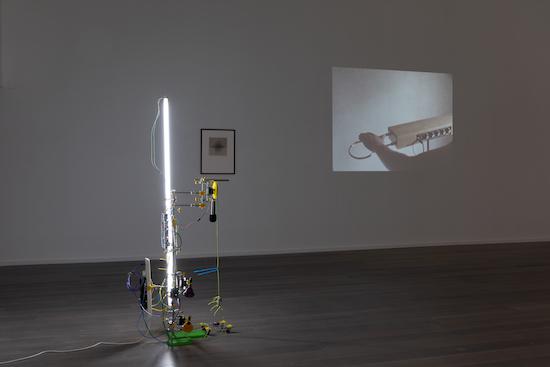 A big part of the appeal of the exhibit (aside from the artworks themselves) is the level of mystery and intrigue that pervades the space. what are we supposed receive, so to speak, various mixed media, photographs, paintings and impressive installations? The confrontation with the works promotes increased sensory concentration: what do we see, what do we listen to? One of the most illuminating pieces that reveals some of the concepts behind the exhibition is Chloe Brenan’s insightful Super 8mm film, Different dusts. Using the theremin, the haunting electronic instrument that operates without physical contact, embellished with images of ancient Irish stone statues and scenes from nature, Brenan highlights the role of the elements in the atmosphere and the temperature of the human body. and the effect they can have on frequencies and natural material like stone. A body leaps into a pond, the ripples of the water mimicking the appearance of sound waves. This particular image coupled with the geometric studies of Theo McNab carried out between 1972 and 1976 on light and sound waves recall the scientific and natural potential of music – frequencies and resonances – to exist on a daily basis. I’m sitting in a room ultimately inspires a deeper appreciation and heightened awareness of the sounds that fill the air and space around us. It’s a focused listening exercise that will change the way you hear the world around you.

I am Sitting in a Room is at the Solstice Arts Centre, Ireland, until August 5, 2022