Jakeman worked for Chilli Willi and the Red Hot Peppers, one of three bands. Fenwick managed another: Dr. Feelgood. The third team on the tour was Kokomo, who provided the AP. Their manager, Steve O’Rourke, also had Pink Floyd on his books.

As the tour progressed, Grateful Dead-esque country rockers Chilli Willi announced they were packing it after the final date. They had been outdone by R&B punk merchants Dr. Feelgood. Jakeman duly became the Feelgoods’ tour manager. Chilli Willi drummer Pete Thomas then appeared in Elvis Costello & The Attractions which would be on Stiff, a label co-run by Jakeman – now known as Jake Riviera. At this point, he was managing Costello.

The Naughty Rhythms Tour was a pre-punk signifier of what was to come – not necessarily punk rock, but a changing of the guard. The tour created a stir. Paul Weller and Graham Parker were two members of the public who went on dates. Unlike Chilli Willi, both were boosted by Dr. Feelgood’s dynamism. Weller reconfigured his musical ideas for his band The Jam, while Parker decided to form a band and released the relevant wanted musicians ad. When the tour hit London’s Rainbow, music writer John Ingham said: “Dr. Feelgood is amazing.

Kokomo also featured in Ingham’s review. “Kokomo glides through a very smooth soul review,” he said before concluding “it’s easy to assume that Kokomo will be phenomenally successful, although it’s interesting to see how long such a big band lasts . [they had 10 members]. Dr. Feelgood is the one to keep an eye on, however, I saw the future of rock and roll, and it was really enjoyable. A little over a year later, Ingham wrote the first Sex Pistols feature story.

Despite Chilli Will’s demise, the tour had raised the profile of the other two bands. Dr. Feelgood released his first album At the edge of the pier to coincide with the dates. Their stripped down style opened doors that helped push punk into the open. They also topped the album charts in the fall of 1976 with their live set Stupidity. Kokomo’s self-titled debut album was also released during the tour and NME said it was “the best UK debut for several years”.

After a second album, dates in the USA and contributions to Bob Dylan Desire album, Kokomo hadn’t quite achieved what he could have. In January 1977, they headlined the London Roundhouse without longtime members Neil Hubbard (guitar) and John Susswell (drums). At this point, they were also directionless and unlabeled. Hubbard and Susswell were absent because they were working with Robert Palmer in America. They needed money. It didn’t seem that The Naughty Rhythms Tour eventually led to Kokomo becoming sustainable. 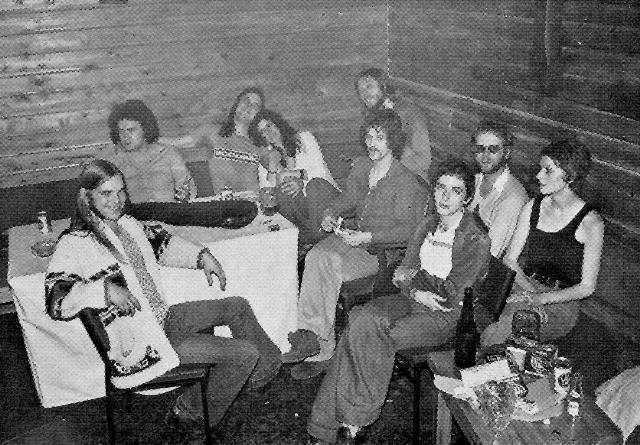 Their early potential is underlined by the double CD set Be cool. The second disc includes five previously unreleased tracks recorded in January 1974 as a demo at Apple Studios. Only one song – “Angel” by Carolyn Franklin – was later recorded for release. The band had formed in May 1973 and were a radically reconfigured version of the “Friends” Arrival hitmakers. Two members had played with Joe Cocker at Woodstock. Soul, in its southern flavor, was Kokomo’s bag. Although the demo catches the band pretty early on, what’s here is fully formed. Regardless of their future, it is, in 70s parlance, tasty. (photo on the left, Kokomo in 1974)

Later in 1974, the group recorded a rehearsal before signing with CBS. These professionally recorded tracks, the 11 collected on disc one, have also not been heard before. Curiously, there is a version foreshadowing the future of Bob Dylan’s “New Morning”. Two songs are by band members: “It Ain’t Cool (to be Cool no More)” by Frank Collins and “Anytime” by Neil Hubbard. Otherwise, it’s soul material from Joe Tex, Allen Toussaint, Bill Withers and others. It must be close to what was heard on The Naughty Rhythms Tour – looser than the Disc Two demo session, more about the groove and vocals than the song itself. Songs are usually longer than six minutes and can exceed the 10 minute mark. While there’s no flab in the game, nothing here screams publicity in the sense of getting it on the record, scoring a hit.

From what we hear Be cool, a sense of Kokomo’s future is simply out of reach. But add to it the knowledge that The Naughty Rhythms Tour was around the corner and it’s possible to understand how they would have stacked up against Dr. Feelgood – the laid back, soulful contrasts with the in your face and wired. Chalk Be cool as a fascinating prologue from the era of pub rock to the overhaul of the British music scene that took place between 1975 and 1977.